The Short History of Stone Countertops

Fact:  In the US, stone has become the countertop of choice over man-made surfaces in all new and remodel construction.

While this statement may not seem ironic on the… um… surface, it is.  It really is.  Here’s why…

Most of the stone used in kitchens is billions (with a ‘b’) years old.  Humanoids have used stone in the procurement and preparation of food for at least 2.5 million years.  By the way, archeologists use the somewhat oxy-moronic term, “Lithic Technology” to describe this.

All but one of the Seven Wonders of the Ancient World were made of stone.  Can you name the exception?

…The fifty foot tall Colossus of Rhodes was said to be made of mostly iron, bronze and brass.  So, for

centuries (both BC and AD) we have been using stone for its functionality, artistic aspect, and permanence.

The Industrial Revolution changed the way stone was quarried, transported, and processed (cut).  The gang saw was invented in Vermont in the 1880’s.  While it took nearly a week, this machine could cut multiple slabs (sheets) out of a single block of stone at one time.

In fact, all of the major advancements in recent “lithic technology” are a result of improvements in logistics (moving the stone) and cutting equipment.

In the late 1960’s Marble quarries began using cutting tools using saws coated in diamond dust.  This technology became commonplace at (or near) stone quarries in almost 50 different countries around the world and by the late 1990’s, the industry quadrupled efficiency in extracting, slabbing, and transporting stones.

Prior to this, almost all stonework was for commercial/monument purposes.   In other words, unless you were building a shrine, it was just too expensive for everyday applications.

Large format CNC cutting beds (like we use at StoneKitchens) have taken the guess work out of forming and finishing stone, and our artisans can be really, really creative.

The kitchen has become the focal point for home gatherings.  While your kitchen may not be the Hanging Gardens of Babylon, please consider our stone work.  Would you like to contact us? 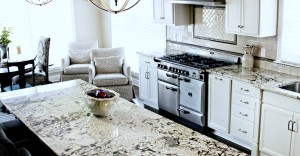